Towards the end of April 2016, fellow photographer David Fox and I decided to take a few days and poke around the northeast corner of Washington State.

We did not have any particular route in mind but we agreed to make the Grande Coulee Dam a destination for day one, and then plan things out from there.

We met on Tuesday at noon in North Bend, fueled-up, and took I-90 over Snoqualmie Pass which was frigid and still had very high snow pack off the road.

We headed to Hwy 97 towards Blewett Pass and chose to ride the Old Blewett Road, the original but now decommissioned two-lane highway that actually crosses Blewett Pass.

The old highway is in very poor shape and is mostly traveled by bicyclists and off-road vehicles during the summer.

We had to clear some fallen trees that blocked the road and we kicked narrow paths through the snow in ice near the top. We spent at least an hour to clearing debris and snow from the middle two miles of the old road.

Once back in the warmth of low altitudes we stopped for lunch and fuel in Wenatchee, then east along route 26 to the gravel switchbacks of Rock Island Grade SW.

The Rock Island Grade twists and turns for a mile with the Columbia River,  Rock Island Dam  and Alcoa’s aluminum plant below to the west.

Once it plateaus the road surface turns to large, loose gravel chunks that feel like marbles under the motorcycle tires.

By the time we made it north to US-2 it was starting to get dark and the almost-full moon was clear in the sky.

It was mostly straight, high speed riding all the way to Coulee City where we discovered the only motel was a bit of a dive, and decided to press on in the dark along Banks Lake to Electric City and then a little further to Grand Coulee.

The long, moonlit ride on Coulee Blvd was amazing with prehistoric cliffs shooting up on the east side of the pavement and the lake reflecting to the west. 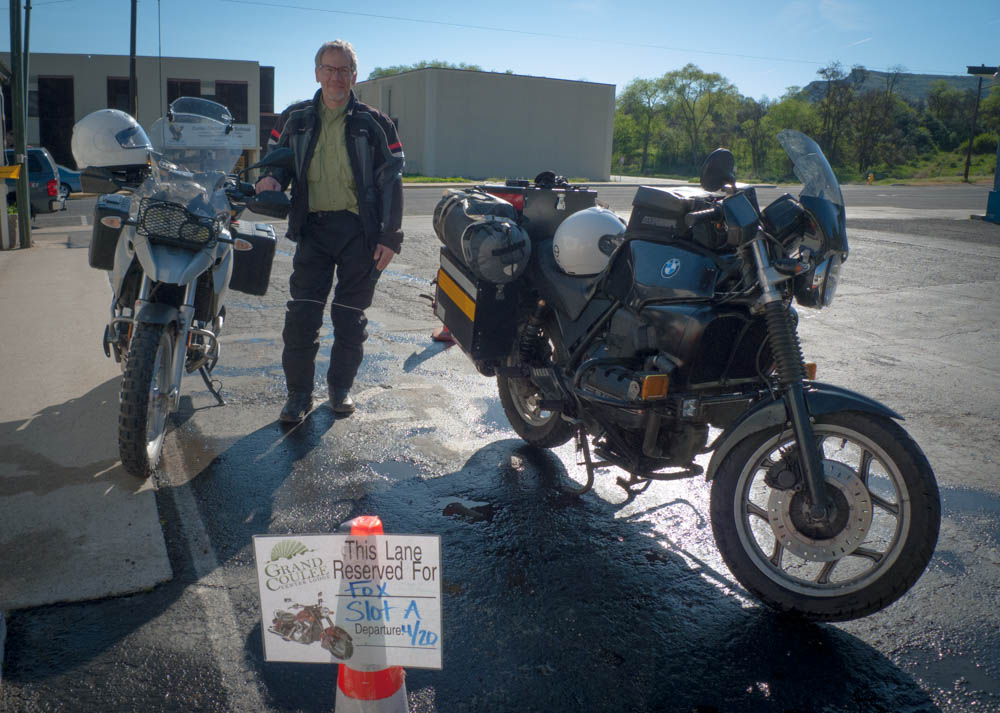 We found a great little motel in Grand Coulee and a not-so-great pub with lame beer and burgers.

I jogged part of the way back to the motel from the pub to avoid the pickup truck spraying mystery gas through the town.

You could taste that stuff in the air. 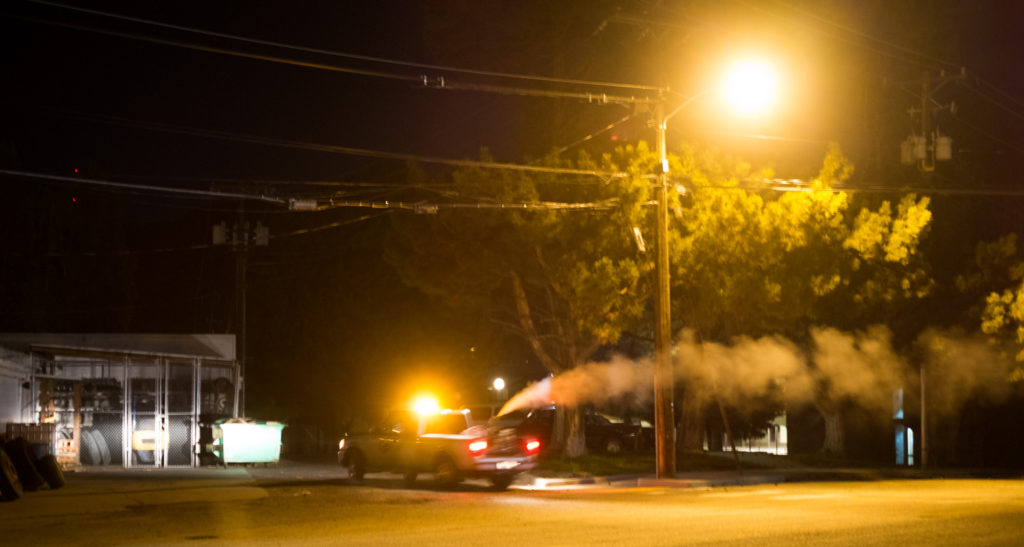 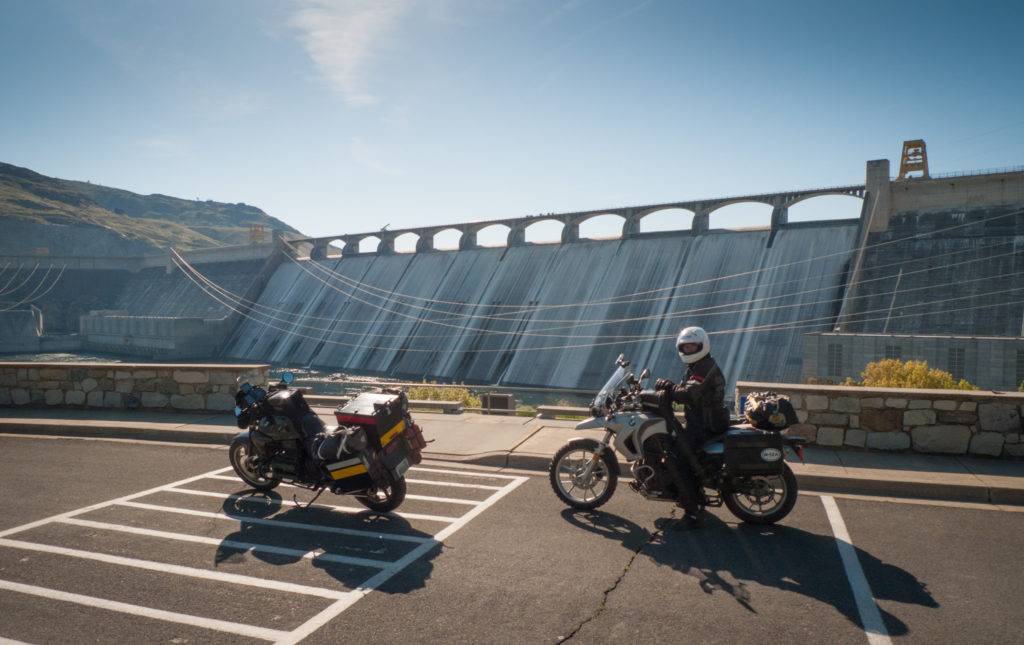 After breakfast at Flo’s Cafe and a quick stop at the Grand Coulee Dam viewpoints, we meandered north through the Colville Indian Reservation and stopped for a snack in Republic, WA. then further north to Curlew, WA.

We headed east on the dirt Boulder Creek Rd, stopped to shoot some pictures of us riding through a water crossing, and then continued on to route 395 which runs along the Kettle River.

We headed north up to the Canadian border in search a waterfall that had been suggested to us earlier in the day, but we couldn’t find it. I bet this is it. Oh, well… next time.

It was the middle of the afternoon and the day was getting hot and uncomfortable in our protective riding gear. Since we only had one passport we headed back south along the river, stopping just north of where the Kettle and Columbia rivers meet in order to dip out feet in the water. 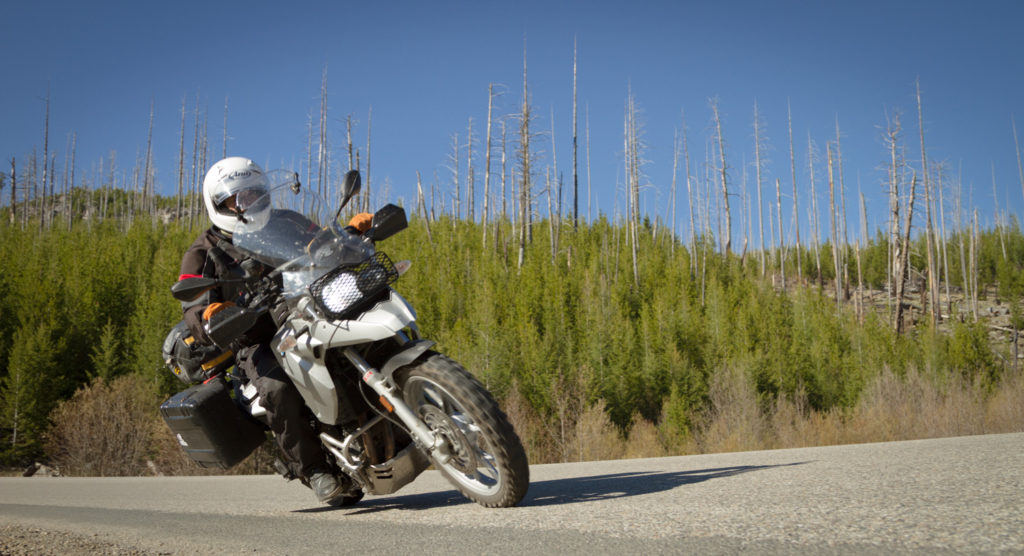 Back on the road heading south to US-20, west to Sherman Pass to shoot some action shots in the twisties, and then east on US-20 to Kettle Falls where we fueled-up, checked-in to the Grandview Inn Motel and got dinner at the Northern Ales Brewery.

Thursday began with blueberry pancakes at Little Gallea restaurant in the Kettle Falls, and then a quiet ride up the east side of the Columbia River to Northport.

We stopped for a snack at the old store in the old part of town, and then hopped on the paved Bounday Rd that follows the Columbia right up to the edge of Canada, veers east along the border for a mile or so, and then dips south back into the forests of Washington State.

We followed another quiet paved road east through the forest heading east to Ione, WA, and then north to Metaline Falls where we stopped for lunch at the only store in town. 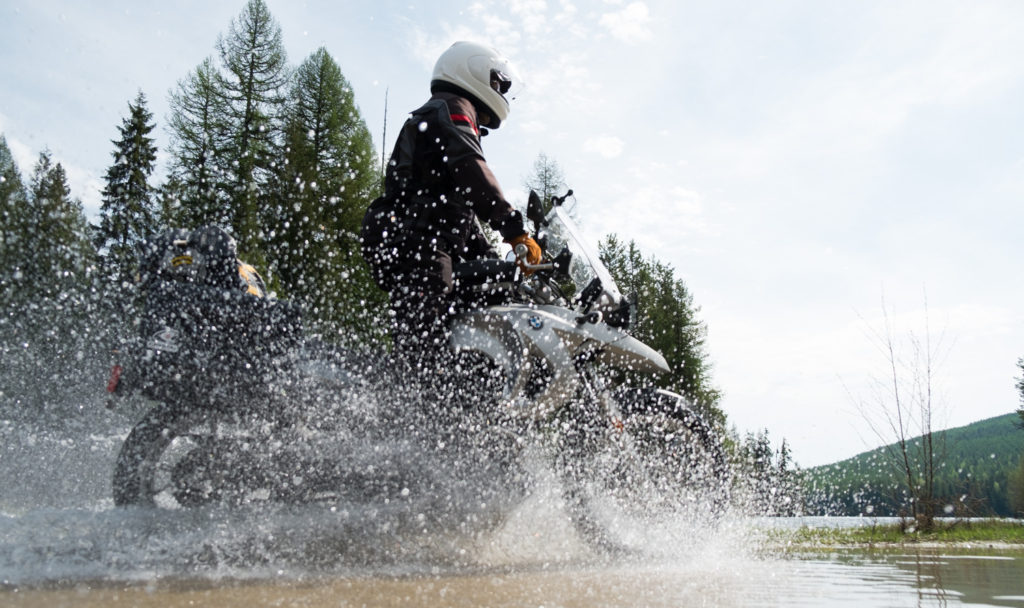 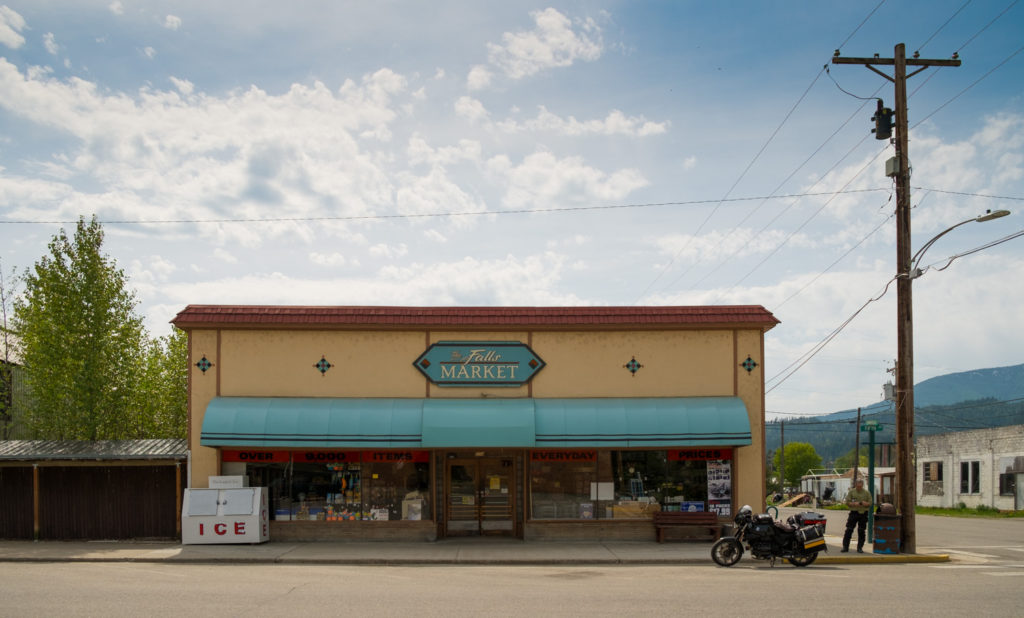 We decided to take Sullivan Lake Road east out of Metaline Falls and then south past Sullivan Lake and back to Ione, but somehow we got redirected up forest roads headed towards the pass at Roundtop Mountain near the Idaho border. 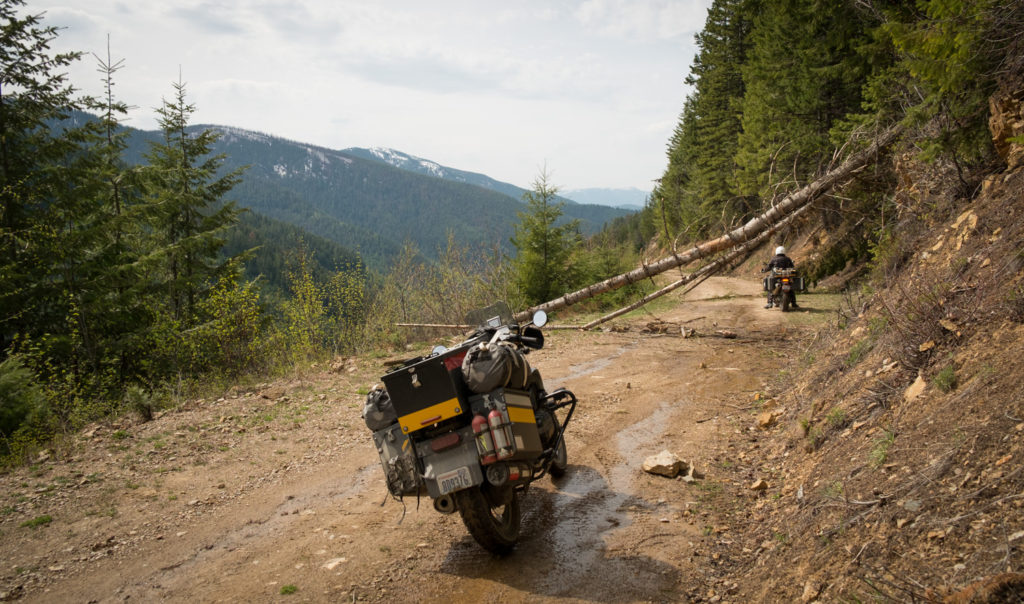 The road got progressively worse the further we got, littered with branches then rocks then whole trees and eventually impassible snow and ice so high we turned around and found our way to Ione.

After a late-afternoon break in Ione for bug cleaning and ice cream we stopped to fuel-up and I discovered my fuel tank cap key was missing, as was my spare key too. I had about 50 miles of fuel left in the tank which ended up being just enough to get me to Colville, WA, the closest locksmith around. We rode at top speed along the magnificent US-20 to Colville where it took about ninety minutes and seventy dollars to get some keys made.

It was nearly 7pm and we started south towards Chewelah, WA where the locksmith had recommended a good motel and some restaurant choices. We checked-in to the Nordig Motel and ate a big plate of pasta at Mondo’s moments before their kitchen closed for the night. A quick beer down the road at the pub and then sound rest back at the Nordig.

Eggs and organic espresso for breakfast at the Flowery Trial Coffee House in Chewelah, and then due south through the rain to the Spokane River and a couple of cool damns we found by chance.

The rain cleared up and we headed northwest on the Wellpinit Westend Road which winds beautifully through the Spokane Reservation until it reaches the Columbia River just north of Fort Spokane.

It was about 1:30pm on Friday and we planned to be home on the other side of the Cascades three hundred miles away before nightfall so we jumped on US-2 and headed west.

Clear skies and comfortable all the way to burgers in Cashmere, WA and then over the wet Cascade mountains and home by about 9pm.